CO-PI’s Creative Bureaucracy Festival recap: We must be ‘proud to serve’

At this year’s Creative Bureaucracy Festival in Berlin, the conversation revolved around the need for radical and structural change. CO-PI (The Danish National Centre for Public-Private Sector Innovation) joined to share their Danish innovation knowledge, and here they share their most important insights from the day.

The original Danish version of the article can be found on the CO-PI website here. 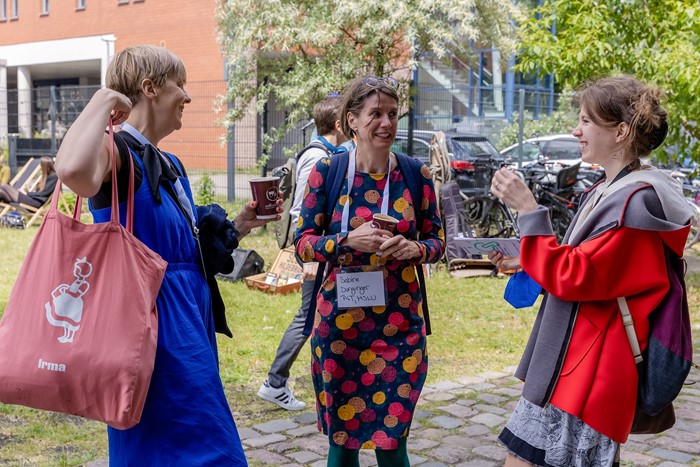 “Innovation and crisis resilience will determine the future of cities and municipalities,” was the opening statement at the Creative Bureaucracy Festival 2022 in Berlin.

The words came from Wolfgang Schmidt, head of the German Federal Chancellery, who in the same sentence stressed the need for increased courage, strong collaboration skills and agile administration.

Given the need to tackle the current crises, administrative reform needs to be a prominent focus of the political agenda.

Participants at the festival agreed. There is an urgent need to catch up on the perceived backlog of structural reorganisations of and within administrations, on the training of specific specialist competences, and on a more holistic use of technologies that better support societal needs.

More than 1000 participants – mainly civil servants and people working with the public sector – attended this year’s Creative Bureaucracy Festival in Berlin on 2 June.

Participants from Germany in particular, but also from Finland, Denmark, Austria, Mexico, Malaysia and the US, gathered along the River Spree for the festival, which aims to boost creativity – and the courage to act in this way – in public systems and bureaucracies, and share new and innovative solutions across German states and national borders.

The day’s programme offered 50+ presentations, seminars, fishbowls and academy sessions on topics such as technology and data, climate, health and citizen engagement.

For the partners behind the festival, a creative bureaucracy is about bureaucrats using their imagination and ingenuity to solve problems with flexibility and adaptability.

Creative bureaucrats are responsive to citizens’ needs and aspirations, but never neglect legislation and political mandates. Creative bureaucracies are able to work together from the bottom up around shared missions to experiment in real life as a way to identify new and better ways to address and solve problems. 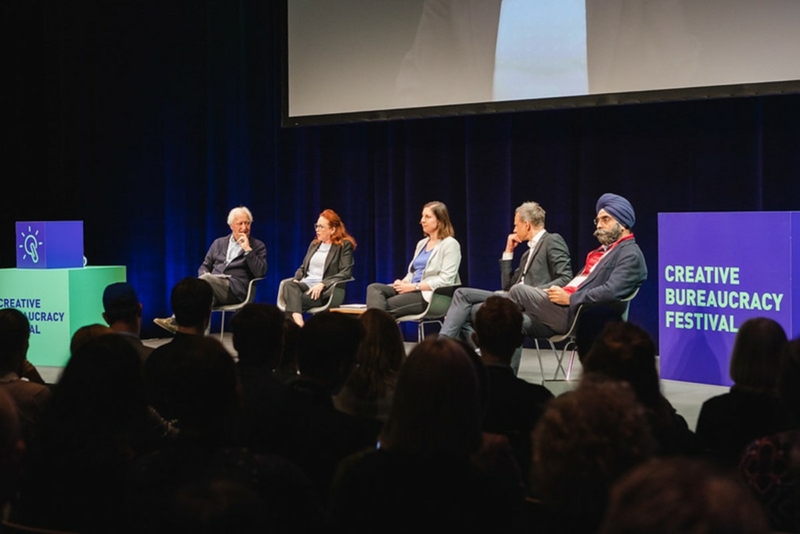 The system is broken

“The mechanisms and systems we have around democracies, governance and administration used to be fantastically effective, but have now become the opposite. We need a bureaucratic revolution because the system is no longer working,” said Indy Johar, Director of Dark Matter Labs on the main stage.

Festival attendees feel the need to make radical changes – especially considering current and future crises. Whether there is a need to throw the Weberian model on the scrapheap or ‘simply’ remove the remnants of New Public Management is up for debate.

More certain is that it will take time and require a measure of patience. This is why Giulio Quaggiotto, Head of UNDP’s Regional Innovation Center for the Asia Pacific, pointed out that it is about ‘chiseling the system’.

Bureaucracy is often seen as a big immobile block – the block can be chipped away at and polished. It is about getting to the heart of good practice in the field. For all creative bureaucrats, there is room for manoeuvre – when you find the small cracks in the system, use your expertise to shape the system to better deal with contemporary problems.

Break down the silos

In Denmark, people often talk about silos, that bureaucracy can be revolutionised by ‘simply’ breaking down silos, and that this will also lead to more innovation. If you ask chief consultant Lene Krogh Jeppesen, that’s not necessarily the case:

“No, silos are an expression of a professionalism that is fundamental to public administration. The problem is rather that accountability is now the driving force. We have an exaggerated need for an old-fashioned form of accountability.”

So have we torched Max Weber? Certainly not. There is something reassuring about creativity being tied so closely to bureaucracy, as it is in Berlin.

For surely we can stagnate in compartmentalised silos. But the quest for an ideal model that continues to demand reason, transparency and qualifications on the part of the manager, for the benefit of the managed, should never go out of fashion.

A means to more innovation

Head of Politics for Tomorrow and organiser of the Academy track at the festival, Caroline Paulick-Thiel, sees creativity as a means to better public administrations:

“I think when you look at the fundamental issues that public administrations have to deal with today and in the future – a future of crises and wicked problems – it’s not just about the creativity of one person or organisation, it’s about systemic creativity. It’s about understanding how we can move systems from one state to another.”

Perhaps German bureaucrats are more rebellious than Danish ones, and there could be many reasons for that.

At the festival’s various sessions, you quickly get the sense that things are more complicated for Germans than for Danes. In particular, the federal system, with its strong tradition and legal framework for self-determination, is seen as a barrier to innovation. Among other things, the system makes it difficult to create a more agile bureaucracy and to introduce new digital solutions.

In Denmark, we have a strong digital infrastructure based on extensive records and data. It is precisely data, as well as the fear of collecting personal data, that is creating barriers to the development of public administration in Germany.

“We have long talked about citizen engagement and the interaction between the political level and civil society – but how do we do it best, and at a scale that allows for change?”

That was the framework for the fishbowl session ‘Sharing Power: Moving Beyond Tokenism to Collaborative Empowerment’, in which CO-PI’s chief consultant Lene Krogh Jeppesen was a panelist. Here, she focused on the role of politicians in innovation work and their possibilities, including illustrative frameworks, for involving citizens’ suggestions and opinions.

One of the frameworks Lene chose to highlight from the Danish municipal political system was the widely used §17.4 committees.

The committees provide opportunities to create and strengthen the relationship between politicians, citizens, local business and civil society around a particular challenge or task in focus – typically one that cuts across silos and sectors: e.g. the UN SDGs, urban development or young people’s mental health. 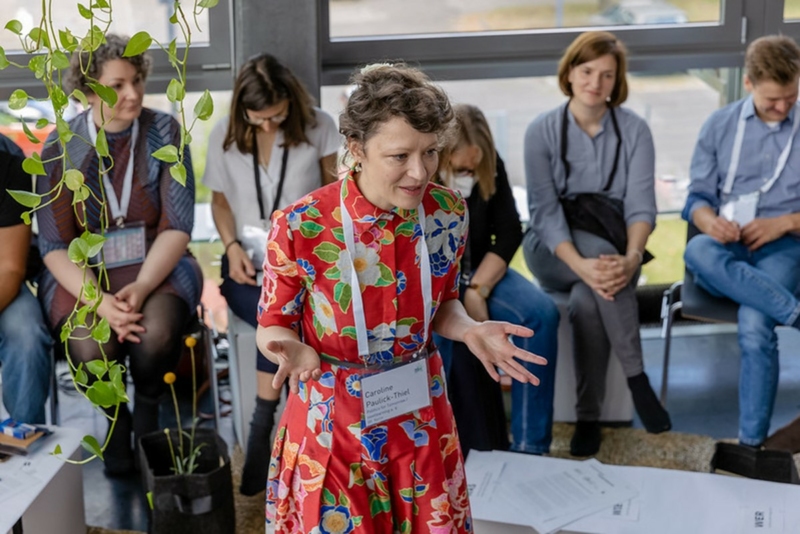 Two dimensions in particular emerged in the debate on citizen involvement and empowerment: representativeness and time.

The public administration bears the responsibility for ensuring that all relevant parts of society are consulted and involved in the development of new solutions and services. This requires resources and time, and it is therefore important that there is an acceptance within organisations that space and time must be offered for getting out and doing things differently than usual.

It is not only about citizen involvement, but also about involving the system in citizens’ lives:

“It quickly becomes about the representation challenge when we talk about citizen engagement. Especially the challenge that services and solutions are not designed to take into account the different user groups e.g. the socially vulnerable. Can we get back to meeting citizens in their homes, instead of forcing them to come to us?”, said Lene Krogh Jeppesen after the fishbowl conversation.

After two years of digital editions of the festival, there was a vibrant and special atmosphere among the many participants, and a sense that people have missed having spontaneous conversations:

“It’s definitely been a reminder of what physical meetings can do. For this festival, they have gathered some really smart people and we are getting new inputs and knowledge from people outside our own little pond. This is knowledge and networks we will draw on in CO-PI’s work to strengthen public innovation capacity – also because we get a critical look at our own cracks in the Danish system,” Lene Krogh Jeppesen said of the day in Berlin.

To conclude the day’s professional programme, CO-PI participated in an Academy session on democratising transformation. The session was held in collaboration with Dark Matter Labs, the UNDP, and the Government of Bangladesh, among others.

“Here it was particularly interesting to see how much participants were challenged by the idea of making something happen within 100 days. The complex societal problems we face seem so big and unmanageable that the idea of being able to make a difference in just 100 days seems impossible”, reflects Lene Krogh Jeppesen, continuing:

“The idea feels provocative to me too – but at the same time it’s more manageable to think in 100-day plans than three-year plans, because reality is constantly changing; whether it’s major crises, staff turnover or a new political agenda.”

Crises, wars and complex societal challenges – yes, there’s plenty to deal with as a bureaucrat and public servant. And there’s therefore also a need to celebrate progress, good ideas, and the many examples of creativity that are already out there.

The Creative Bureaucracy Festival co-founder, Charles Landry, explains the purpose behind the movement and the festival:

“It’s about spreading the energy and message so that ideally an ever-growing group of people identify themselves as a creative bureaucrat and proudly feel they are part of something bigger – without being arrogant, and by being a bit funny and occasionally humble.”

In other words, it’s about being ‘proud to serve’.

STAY UP TO DATE!
Sign up for the Creative Bureaucracy newsletter